According to 2 Peter, Lot was a righteous man living in the midst of wickedness. Lot had gone from living outside of Sodom to living in Sodom and serving in some counsel capacity by sitting at the gates of the city. When the two Angels arrived at the gate of Sodom, Lot urged them to come to his home instead of sleeping in the streets.

The men of Sodom did not know the men were angels for the Angels appeared to be mortal men. The Sodomites had evil sexual motives and pressed upon Lot with the intent to break down Lot’s door to get at the Angels. The Angels smote the men of Sodom with blindness.

As we read that Lot is gathering his family, Arthur addresses:

Listen as YeHoVaH remembered his negotiations with Abraham and preserved Lot before everything in the cities were decimated. 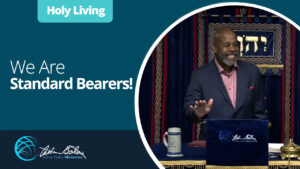 We Are Standard Bearers!