This episode begins with Abram leaving Egypt with his wife and his nephew, Lot. Abram was very rich in cattle, silver, and gold that Pharaoh had given Abram for Sarai’s sake. Abram returned to the place where YeHoVaH had appeared to him and where he had called on the Name of YeHoVaH.

Abram’s and Lot’s substance was so great that they could not dwell together. They decided to separate. Lot moved by sight and his decision to pitch his tent toward Sodom would cost him dearly. Abram moved by faith and depended on YeHoVaH to sustain him wherever he went. YeHoVaH prophesized over Abram and made an everlasting promise to him. 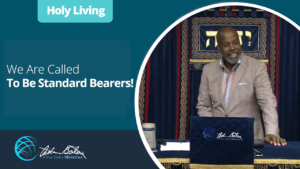 We Are Called To Be Standard Bearers!