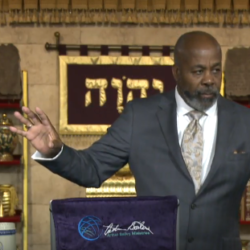 Arthur definitely studied to show himself approved on this teaching!  He squeezed explanations, wisdom, and practical living points “plum out” of Peter’s Sermon in Acts 2!   Arthur started by explaining about the tongues that were spoken on the Day of Pentecost. The disciples were speaking in intelligent languages that they themselves did not understand.  However, the Saints who were gathered from many towns and cities outside of Israel understood the disciples speaking in their own native languages.  The travelers to the Feast heard, in their own tongues, of the wondrous works of Elohim!

I would that ye all spake with tongues but rather that ye prophesied: for greater is he that prophesieth than he that speaketh with tongues, except he interpret, that the church may receive edifying.

Arthur debunks the notion that our dead loved ones are in heaven looking down on us.  He reads:

Men and brethren, let me freely speak unto you of the patriarch David, that he is both dead and buried, and his sepulchre is with us unto this day.

Arthur stated quite succinctly, when we die, we go to the grave and await the resurrection.

Arthur investigated the theological mindset that takes one further and further away from the gospel that Yeshua and the disciples taught. Arthur coined a catchy phrase:

With each new Revelation,

Arthur gives other examples of how some of us have let denominations interpret the Bible for us, to our detriment. Arthur reminds us that we have all picked up information and beliefs from home, school, churches and our environment. We have to always use our brain, use logic, and use the Torah as a filter when reading Scripture.

Learn more about Contending for the Faith which was once delivered unto the saints.

The first litmus test (criterion for making a judgement) for the true gospel is, there MUST be a call to the people for REPENTANCE.  Most religions don’t deal with repentance, just accepting Jesus to be saved.

Arthur mentioned that if there was ever a day when he didn’t feel like coming to service, it was today.  However he said, regardless of how his body felt, his body doesn’t lead him.  Well, the evidence of that was in the fruit of the teaching!

Getting to the point of truly not letting my body lead me has been a process.  However, I have always been more of a “get-up and go” person.  I was never a “slop-dragger” (That term, used by Floyd’s family, came back to me when Arthur was talking about slopping the pigs.)  Throughout my life, my Mama always told me in the face of difficulties, “Where there is a will, there is a way!”

In my experience, I have had to go through many successive levels to overcome my body wanting to weigh me down with sluggishness or my emotions wanting to immobilize or slow me down.  As I reflect back, a few of the milestone events that I tackled and had victories were:

What also helped me was that I grew up in a generation that “your word was your bond”.  People were known by how well they kept their word.  I had a relative that would flat-out lie to me and my cousins.   I didn’t like him and really despised his behavior even as a child.  I purposed in my heart that I would not be that way and try as hard as I could to be truthful and keep my promises.

When I adopted infants, all that prior training came into play.  Before children, my time was my own.  My Sister even said to me, “Why don’t you get some children, all you do is watch TV!”  Now that really wasn’t an accurate assessment, but what she meant was that Floyd and I had a lot of free time.

Before children, I was happy eating TV dinners and having cereal for meals.   I knew that I could not feed that junk to children. (Hmmm, that’s another story about why I ATE IT!)  So cooking real food began; as best as I knew what and how to cook.  (I eventually learned that pork and shellfish were not food.)

The biggest hurdle with children was realizing that my mind had to be focused on them all my waking hours and I had to wake up in the midnight hours to attend to their needs.  For many things, I was on their schedule, LIKE IT OR NOT.  I had to change diapers when they were wet, not when I was rested enough to feel like it.  I had to dress them, bathe them, feed them, read to them, play with them, clean up after them, and referee them.  There were times that I felt overwhelmed, but I learned that it is just easier to do what I have to do and not listen to my emotions telling me that I should feel sorry for myself, and other non-productive thoughts.

That was the natural side of this issue.  When I came into the spiritual understanding of the power and authority I have over all spirits (including emotions), I really do have freedom! My body has NO power over me.  So I can definitely relate when Arthur said, “My body doesn’t lead me!”

We continued with our weekly meetings on the upcoming Fall Feasts. We all heard updates on the status of the ten committees working to make sure all will be well, organized, festive, and welcoming as we plan to celebrate with Sisters and Brothers that plan to travel in from faraway places. So far, I am aware of Brethren coming from Texas, New Jersey, Bahamas, and Pennsylvania.

on ideas to engage the youth on the importance of celebrating the Feasts. There is something about crayons, glue, stickers, noise makers, and construction paper that stimulates the creative side of me. I won’t give away their plans, but it looked pretty exciting to me! 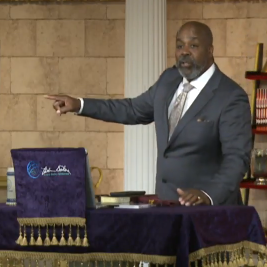 The Gathering Committee met and talked about foods to put on the list for the Brothers and Sisters to bring. One of the main dishes involves deep frying a large brined bird! Yummy! The Sunday Gathering at Brother Vincent’s house is going to have activities that will engage all age groups. I definitely want to see the ping pong matches and the “rise and fly” Bid Whist games.

I also witnessed a Brother confess and repent to a matter that no one would have known of if he had not brought it out into the open. He asked for witnesses to be present. The three witness Saints chided with him about the matter and agreed with the manner of repentance that was suggested. He was admonished and forgiven. I am glad that we have a fellowship where matters can be dealt with in such a Biblical manner.