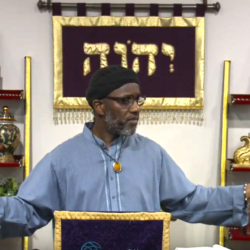 Truth never gets old!  Efraiym’s Teaching from Genesis was a testimony of that truism.  He taught from truth and wisdom that was more than 6,000 years old (from Creation) and yet is still relevant TODAY.  Efraiym said that Genesis, or Berishith, is his favorite Book of the Bible.  Berishith means “in the beginning” in Hebrew.  This is a book of many beginnings and it sets the stage for the rest of the Bible.  Efraiym discussed a few of the many stories contained in Genesis.  Below are some of the highlights of the Teaching.

Adam and Eve Before They Knew They Were Naked

There is much to learn from the old paths and the Saints of the past.  We must trust in the written Words of Scripture and the Words the Father speaks to us.  That is the narrow path of life.

Initially, Adam and Eve were naked in the garden.  Efraiym extrapolated from their situation to our relationships and encouraged us to be transparent with one another.  He urged us to be “real” with each other.   He cautioned that we should never make the other person sorry that they opened their veil and revealed themselves to us.  That was good advice.  I recalled two situations where the relationships were thwarted due to a lack of understanding of this wise counsel.

A friend of mine shared a story with me more than 30 years ago.  At the time, she was a social worker in Pittsburgh.  She was the caseworker for a woman who had a great and longtime phobia about leaving out of the residential facility where she lived.  Overtime, my friend got her to the point where she was able to go bowling with some of the residents.  When she returned from the outing, the woman was quite animated as she was sharing her accomplishment of overcoming her fear with a friend.  When the woman finished, the friend said, “What was your score?”

I have had many instances where I regretted being open and frank with another person.  I have groaned inside after I have shared deep thoughts, needs, and emotions and the other person looks blank, or just grunts and doesn’t say a word about my passionate disclosure.  I tell you, once I was so dumb-founded by the lack of reaction that I broke out in a version of Dionne Warwick’s song:

It didn’t work, but it helped me to learn a lesson about discerning who has the capacity to hear, understand, and appropriately respond.

Matthew 7:6 Give not that which is holy unto the dogs, neither cast ye your pearls before swine, lest they trample them under their feet, and turn again and rend you. (KJV) There were intense conversations happening at several of the fellowship tables.  Some of the Saints had even pulled up chairs at the ends of tables so they could be included.  As I walked to join various table conversations, I looked around the Sanctuary and also saw pairs of Saints talking and ministering to each other.

I sat with a group of Brother Saints and we discussed the topic of allegiances to ethnic and racial groups.  It was quite lively. However, we had a consensus on our primary identity being a son of Elohim.  We also talked about how correction was not pleasant. One of the brothers said he didn’t like being wrong and asked if that was pride.  I told him that most of us do not like being wrong.  I went on to say that if you are given correction and refuse to receive it, then I think that is when pride enters.

The next conversation I joined was a discussion about an upcoming trip to Israel.  Then the exchanges turned to hearing and obeying the Father’s Words.  Three of us were vocal about our experiences of hearing the Father and then delaying or being distracted from doing what He had instructed us to do.  We expressed our regret and angst about having to learn from our mistakes and being disappointed that we hadn’t followed through on the Words Father had given us.

We should all know How to Hear God’s Voice (Book)

Another thread of the conversation was about how we are so “busy” and we need to take time to be still and hear His small voice.  We talked about the differences in the American culture of “work, work, work” and the culture of some European countries where businesses and restaurants close in the mid-afternoons for a Siesta (rest or nap).  When I was in Malaga, Spain, I found it hard to adjust to the shops closing.  I remembered thinking, “What do I do now?”  One Brother Saint humorously described how he worked with both his iPad and laptop open, eating, and at times also talking on the phone.  We all agreed that we need to slow down our pace, appreciate the moment, and be still and hear Our Father’s voice and sense His Presence.